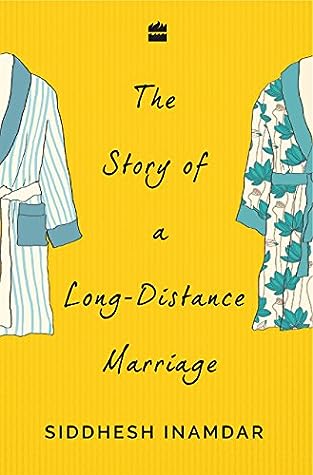 As I walked in the book section of a mall on Hosur Road, Bangalore, India on January 12, 2019,  searching for interesting  books to take back home to Cameroon, my curious eyes fell on  Siddhesh Inamdar’s novel: A Story of a Long Distance marriage. My eager hands immediately reached out for a copy and I shoved the attractive book into my shopping basket and raced towards the counter. Siddhesh Inamdar’s The Story of a Long distance Marriage was released in 2018.  The plot of the novel is so intriguing that one will not put it down until he/she reads the last line of the story.

Set in Delhi and New York, the story line revolves around the marriage and love relationship of a newly wedded couple, Rohan and Ira. The novel points to some of the throes that a couple who are both career persons have to undergo if they must make ends meet and also attain their career goals. The author begins the novel with an exacerbating shock and an excruciating pain because just a year after their wedding, the couple has to part for some time as Ira has to travel to the United States of America for further studies. She has just been granted a partial scholarship in “the Department of Arts History at a prestigious university in New York”(4). This offer comes just a single month after Rohan and Ira’s wedding anniversary.  In spite of Rohan’s sadness with regards to the fact that Ira will have to be away for one year, Ira is determined to fulfill her dream. She drives the bitter truth through Rohan’s veins with this categorical statement:

But I’m going to miss you too, [.…] Of course I’m going to miss you. But that’s not what our marriage should be about right? I want to live my life and my hopes and my dreams even if it means living away from you a year or two. And I want you to do the same too, if that’s what you want. We’ll always have each other to come back to. (6-4)

Ira finally leaves for New York, what Rohan had dreaded most but couldn’t change.

Left behind in the harshness of a lonely life, Rohan has to brave all difficulties and the temptations from friends and neighbours who think that he will have a hard time as he will be deprived from the sexual pleasure he would normally have if his wife Ira were around. “What will you do for sex now?’’, one of his close friends, Yusuf, probes (16). This question plunges one into the gender stereotype of women as sex objects/machines. It is a patriarchal way of viewing the world only through the lens of the male sex. The question as to whether Ira will have the same difficulty is not raised. This silence points to Gayatri Chakravorty Spivak’s argument in her popular paper “Can the Subaltern speak?” Women are often silenced and this is revealed in the question Yusuf asks Rohan above.

However, the good thing is that the fear of Rohan cheating on Ira as presupposed at the beginning of the novel is watered down by his faithfulness which is proven by the many temptations of having illegal affairs with other women which he stubbornly resists. At the end of the day, Rohan turns out to be a feminist, a faithful husband, and a model as least as far as fidelity is concerned.  He has a female colleague, Alisha, with whom he likes to have coffee most of the times, but their relationship ends at that.

On Christmas Eve, Rohan turns down the offer of several of his colleagues including Tanuj and Alisha to go with them to the Sacred Heart Cathedral and goes rather alone. He has once been there with Ira and he thinks he should keep up with this Christmas tradition and even convert it into “an established ritual” (61). On Christmas day, Rohan receives a pineapple upside down cake as a gift from Ira. She had asked her parents to bake and send to her husband. Rohan on his part does not remember to send Ira a Christmas gift and when Ira calls later, this issue of Rohan not sending her a gift sparks up a fight between them. Ira feels bad and goes silent for a week.

What is more interesting is that along the line, Rohan contemplates divorce, but Yusuf advices him not to do so such a thing and he complies. Ira finally returns to Delhi and she and Rohan go on an anniversary holiday. After the holidays, Ira will have to return to New York and Rohan resolves thus:

I won’t recent it this time because I know this is what makes her happy, this is what is good for her.[….] If she wants to stay there, I won’t ask why we even married if we if we are not together. Years may go by but I know love will hold us together even when we are apart. No matter what, I know now, we will always have each other. This marriage, this time, is for the long—and—full distance. (174)

At the end of the day, Rohan comes to an understanding that distance does not hinder marital love if the distance is for the good of the couple. Every relationship has its trials and the couple must understand how to cope with these trials in order to stay together. Distance does not equal divorce.

Spivak, Gayatri Chakravorty. “Can the Subaltern Speak?” Marxism and the Interpretation of Culture. Ed. Cary Nelson and Lawrence Grosberg. Urbana: U of Illinois Press, 1988. 271-313.

Cameroonian born Sinyuy Geraldine earned her PhD in Commonwealth Literature from the University of Yaoundé in 2018. Dr Sinyuy started writing poems in her teens and most of her poems and folktales were read and discussed on the North West Provincial Station of the Cameroon Radio Television (CRTV) Bamenda where she was often a guest writer for the programme, Literary Workshop: A Programme for Creative Writing and Literary Criticism. Sinyuy Geraldine has received the following awards: Featured Storyteller on World Pulse Story Awards, May 2017; Prize of Excellence as Best Teacher of the Year in CETIC Bangoulap, Bangangte, 23 October, 2010; Winner of the British Council Essay Writing Competition, Yaoundé, 2007; Winner of Short Story Runner-Up Prize, Literary Workshop: CRTV Bamenda, 1998. Her publications include: “Stripped” FemAsia: Asian Women’s Journal; “Invisible Barriers: Food Taboos in V. S. Naipaul and Samuel Selvon.” Tabous: Représentations, Functions et Impacts; “Migration related malnutrition among war-instigated refugee children in the northern part of Cameroon” in South African Journal of Clinical Nutrition; “Cultural Translocation in Three  Novels of V. S. Naipaul” in International Journal of English Language, Literature and Humanities. Vol. IV, Issue XII; “Journey without End: A Closer Look at V. S. Naipaul’s Fiction” in International Journal of English Language, Literature and Humanities. Vol. IV, Issue IV; “Which Other Way? Migration and Ways of Seeing in V. S. Naipaul” in Migration, Culture and Transnational Identities: Critical Essays. Some of her   poems are featured on Time of the Poet Republic; Africa Writers Caravan; For Creative Girls Magazine; and Fired Up Magazine. She is currently working on her collection of folktales and her first novel.

One thought on “The Story of a Long Distance Marriage by Siddhesh Inamdar. A review by Geraldine Sinyuy”